Hello groovers. Did you enjoy your festivities? Are you throwing rocks at your telly at all those Slim Fast commercials?

You know those dreams where you go to school in your pyjamas? That happened to me tonight fer real except it was at kickboxing. That’s what you get for packing your gym bag in the dark. Luckily it was only PJ bottoms, navy blue. But they were too tight and the navy blue t-shirt I’d packed was too short so I looked like a navy blue Tellytubby.

It was a mixed ability class tonight, due to a revised Christmas schedule. And whaddya know, I was the sole representative from the Beginners group. All the rest were Advanced, in their matching official Team Scary satin trousers that they wear when they officially clobber people for trophies.

I nearly ran out the door but I’d paid my 3 quid and didn’t want them to think I was a wimp. Because I’m sure they wouldn’t have figured that out from the way I wobbled with fear and cocked up every move. The indignity of it all. I don’t mind looking stupid in the beginners class, in fact I quite enjoy it. But in front of those feisty scrapping machines was something else altogether. Confidence is entirely contextual, you see; it’s no fun when you can’t share around the ineptitude!

It’s good to be back in the saddle after Christmas. It was a low key couple of days, and I frolicked in the strange and delicious sensation of not being stressed about whether I was eating too much and if my world would collapse if I ate a dozen After Eight mints. World still seems to be intact and breath is minty fresh!

Gareth the Wholesome went cycling on Christmas Day. Christmas Eve, too. Rhiannon and I sat on the couch a lot, chatting and making plans and setting goals for fancy new exercise regimes and schedules but the closest we got to actual exercise was walking to the shops to buy pedometers then giving up when we saw the queues, so we went back home and resumed our perch.

Have any of you Scavenger Hunt winners received the goods yet? I sent the Mothership a copy of DG on Friday (December 21), and would you believe she got it yesterday? Five days to Australia, with Christmas and everything!

Mary, my Mothership-in-law, phoned tonight to say she’s about 100 pages in. My guts are churning thinking of all the upcoming swear words and the boom-chicka-wow-wow bits involving her son. Why did this not occur to me before? That people might read it and not just shove it on the shelf between a crumbly pair of Agatha Christies?

Also, many of my kindly work colleagues have copies. So instead of being That Chick That Swears At Her Computer, I will soon be… That Chick Of Whom We Know Far Too Much Information.

But it’s exciting, comrades! I had the first official sighting on December 23, nine days early at our local WH Smith. Then yesterday I saw a dude unpacking copies at Waterstones in Edinburgh, and Rhiannon and I jumped up and down discreetly.

Here it is at WH Smith, snuggled up next to Gordon Ramsay. Woohoo! 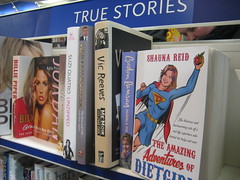 Comments are now closed on all Dietgirl posts. For fresh conversation please visit me at shaunareid.com.